(reposted with permission of The Myanmar Times, additional photos added)

Their weight in gold: How material wealth creates spiritual energy in some of the world’s costliest holy places

Nearly US$3 billion, or at least 5 percent of Myanmar’s current annual gross domestic product – that’s the estimated value of the umbrella atop the Shwedagon Pagoda in Yangon. “As it stood overlooking everything it seemed to explain all about Burma,” Rudyard Kipling wrote about it.

Shwedagon is more than a national symbol. It is Myanmar’s Fort Knox. Its main stupa alone is plated with nearly 22,000 solid gold bars, and estimates of the pagoda’s total gold range from 9 to 60 tonnes. The official reserve of the Republic of the Union of Myanmar, for comparison, is 7.4 tonnes. During British colonial times, it was said Shwedagon contained more gold than the deposits of the Bank of England.

According to the pamphlet given on entry to the pagoda, there is over half a tonne of gold in Shwedagon’s umbrella alone. It’s also set with over 5500 diamonds – the largest of which is similar in size to one that Sotheby’s auctioned for $10-12 million. Its main spire boasts 2300 rubies, sapphires, and other gems, and 4000 golden bells. And none of this includes the gold, jewels, and 21st-century LED displays that swirl around many of the Buddhas and hundreds of other buildings on the pagoda platform. 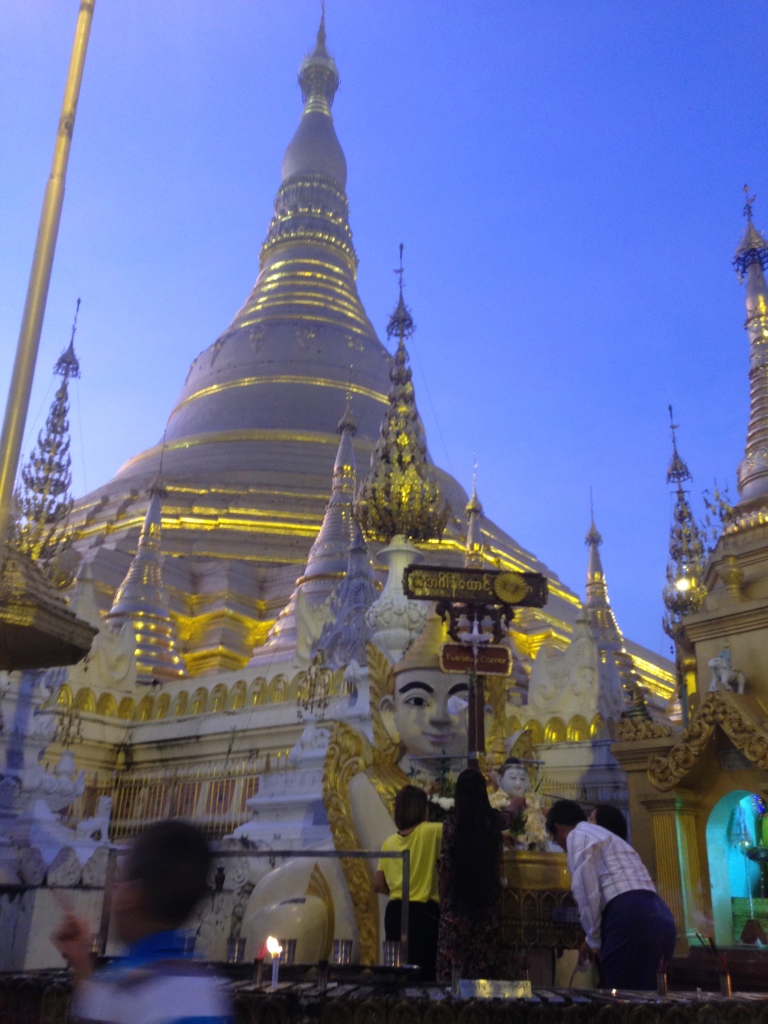 Add the value of all this to the other precious construction materials used – not to mention the mind-boggling amount of labour invested over the centuries in installation, maintenance and security – and the true value of Shwedagon could easily be a multiple of the 5pc GDP estimate.

Myanmar is not the only place where religious organisations display their wealth in such a dramatic and open manner. Barcelona’s Basílica de la Sagrada Família (Basilica of the Holy Family) has been under construction for more than 130 years and will finally be complete sometime in the middle of this century. The Sagrada Família is expiatory, or donation-funded. Visitors are charged an entrance fee of €24 (about $33) that covers everything from the audio guide to tower access. Posted notices clearly state that the money is being spent on the construction of the cathedral.

Locals aren’t charged for entry to Shwedagon, but most do invest in it financially. At this and other pagodas and holy sites across Myanmar, vendors sell flowers, incense, gold leaf, all to be offered at the site. At a pagoda in Bagan, I purchased a square centimetre of gold for K100 (about US$0.13) and applied it directly to a Buddha statue. At the Swal Daw Pagoda in the outskirts of Yangon, the 10-pack of gold leaf I bought was placed in a basket and, with a pulley and a little help from an assistant, hoisted to the top spire where someone else would apply it for me. While purchased for a seemingly nominal cost, the gold had in fact been sold to me at a rate of $7500 per ounce, nearly six times the current international market rate. And I wasn’t the only one buying it: At the Phaung Daw Oo Pagoda near the floating market in Inle, I saw five ancient Buddha statues so covered in layers of gold leaf that they looked more like Michelin men than Samma-sam-buddhas, beings who reach perfect enlightenment. 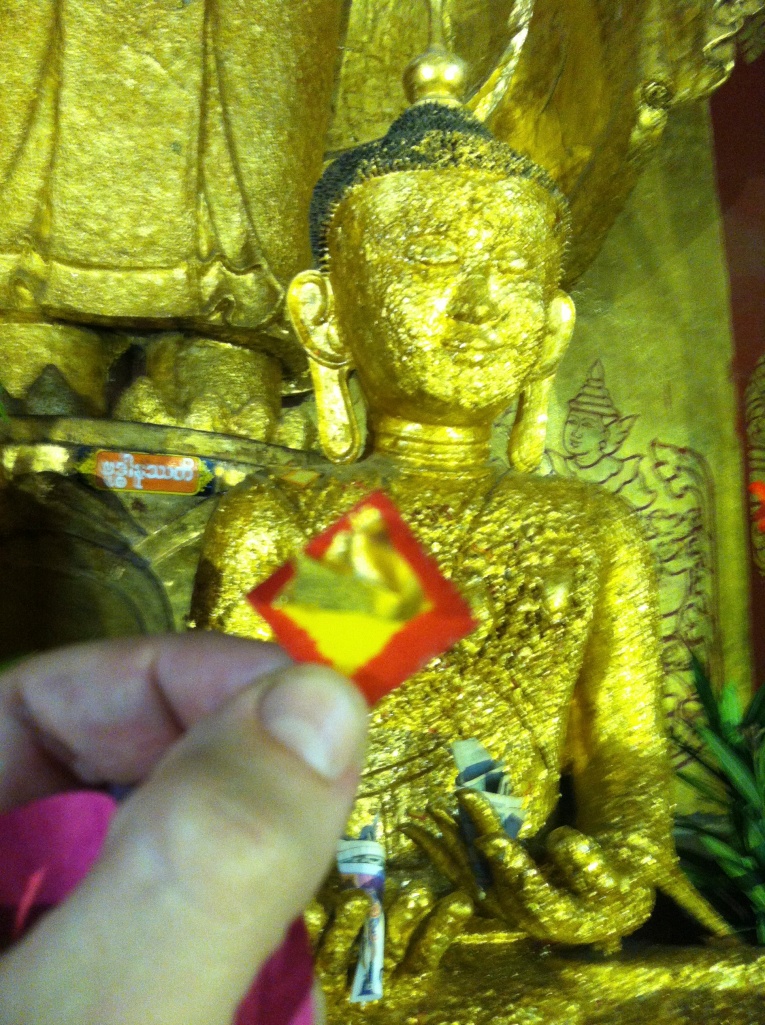 What do visitors to these ostentatious yet holy places get in return? It’s useful to reflect on why Shwedagon was built on Singuttara Hill in the first place: Structures built on top of hills rise up above their surroundings, commanding more attention and energy than anything else around and leading the eye skyward. In Buddhism, the upward pull is not to heaven as it is in Catholicism, nor even to the location of the nirvana state. Rather, it is an opening of the body and an encouragement to the contemplation of something greater.

The designs of the pagoda and the Sagrada Família inspire us because they play into universal principles of beauty, such as the gravitational pull on an arc and Phi, the golden ratio. Phi is a geometric relationship which is exhibited in the spiral of a nautilus, the seed pattern of a sunflower, and, in human designs, Mount Meru in India, the Chartres Cathedral of Notre-Dame, and Apple stores far and near. When we see it in architecture, it evokes a response from a part of the human psyche where science and mysticism meet in deep-rooted biological ways that surpass human understanding. We are moved, touched, lifted. The great works draw our eyes upward and, at best, open a window to our souls. 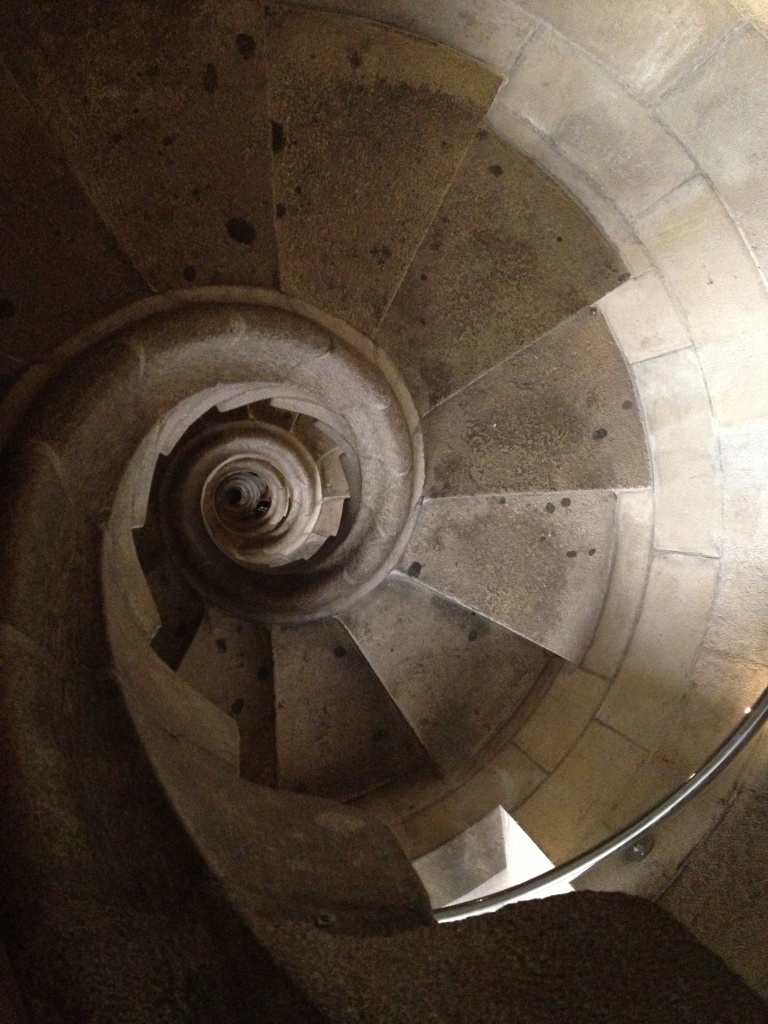 The question, then, is not whether these religious displays of wealth have a value beyond their monetary cost. It’s whether the opportunity cost is worth it. Pope Francis recently said, “How I would like a Church which is poor and for the poor!” And it’s hard to deny that these displays and collections of religious wealth are often in stark contrast to the living standards of many of the religion’s own flock. Given the poverty of so many of the world’s Catholics, the Vatican’s treasure trove – inestimable given all the priceless artistic works – is one staggering example of this division. But the life of a Catholic slumdweller in Italy lays bare the same divide between the church and its people as does the life of a Buddhist taxi driver in Yangon whose family lives in the hatchback while he picks up passengers.

The cathedrals and collections, though, do generate economies of their own. And in Myanmar, pagodas provide construction and maintenance jobs, probably steer some graft and administrative fees to local officials and, perhaps more importantly, serve as part of a social welfare system for Myanmar’s roughly 600,000 monks, nuns and novices – a group that outnumbers the military’s ranks of 400,000.

The display of wealth also emits its own energy, drawing together believers to a place of heightened attention and in doing so creating an informal sangha, or community. Gold is a good example of this draw: Universally prized for its scarcity and beauty, it has little actual utility, and instead represents the effort and energy used to create the wealth that’s necessary to obtain it. Myanmar’s tradition of purchasing gold leaf dates to the 15th century when the Mon Queen Shin Sawbu gave her weight in gold to Shwedagon. The contributions have been continuing ever since.

The gilding of religious buildings and objects does use energy that could have created houses, healthcare, new fishing equipment or other worldly goods. But participating in such seemingly wasteful contributions as gold-leaf donations does have redeeming social quality. Whether in Catalonia or Myanmar, ostentatious displays can speak of a wealth that is not only material but also spiritual. Collecting and displaying riches is one way of creating places that are and feel sacred, full of spiritual energy, where visitors, congregants and the sangha can get closer to their respective ideals.